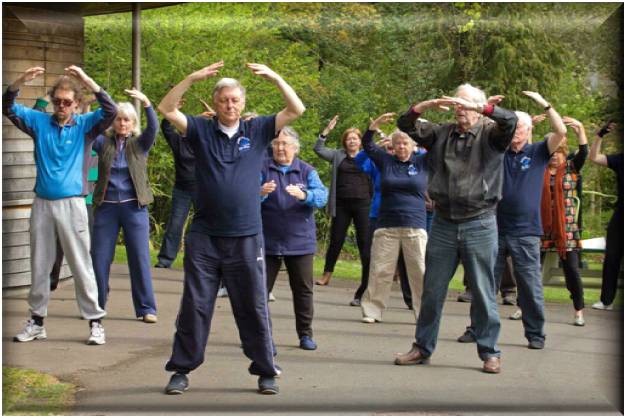 We use Chi Kung for our 'BODY MAINTENANCE' programme. Something of its background is shown below, but in essence it is an exercise system built around awareness of the body and learning to CONTROL as many of its functions as possible.

Movement and exercise have always existed in the Chinese culture. The earliest reference we have to special 'dances' for warding off illness date from the period of the legendary Yellow Emperor, Huang Ti, who reigned perhaps as early as 2700 BC. Certainly by the 6th century B.C., scholars had already begun to classify various methods of exercise and breathing techniques for maintaining health - some of which may be depicted in jade carvings dating from this time. Later, during what is known by historians as the Warring States Period, 480-222 B.C.. we find the emergence of what are called Tao Yin (daoyin) disciplines - special exercises for health that may, in part at least, have been derived from the much earlier era of the Yellow Emperor.

Tao Yin means 'guiding and inducing' - guiding and inducing the flow of chi around the body. At the same time, special breathing techniques combined with meditation were also being introduced by the Taoist philosophers. These techniques, they claimed, were effective not only in the treatment of certain illnesses but also in the prevention of disease. It is important to understand that in those times a philosopher was also someone who meditated and probably also practised medicine. All these subjects were linked, making up what we would today term an 'holistic' approach. 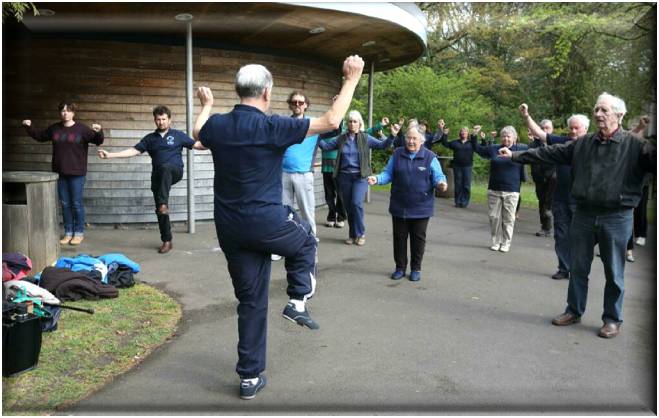 Combining traditional knowledge with modern medical theory, Dao Yin Yang Sheng Gong is a system of exercises characterised by gentle twisting motions and involving breath control, the stimulation of key acupressure points in the body and mental development. These have been developed over the period since about 1965 by Professor Zhang Guangde, now based at Beijing Sport University.

Its soft, fluent and harmonious movements aim to improve energy circulation within the whole body, to loosen the joints, tone up and oxygenate the muscles and to relax the nervous system.

The system is an extremely comprehensive one. Some exercises are designed to "soften" the body and develop flexibility, others relate directly to specific organs, while others have a more general effect on the health. There are both standing and sitting forms, making the system accessible to people of all ages and physical conditions. For more advanced practitioners, Professor Zhang has created Tai Ji Quan hand and sword forms which combine traditional Tai Ji martial principles with acupoint stimulation.

Dao Yin Yang Sheng Gong therefore has three aspects which make it such a valuable contributor to health care.

First it is preventive. People in good health may practise in order to maintain and enhance their robustness. 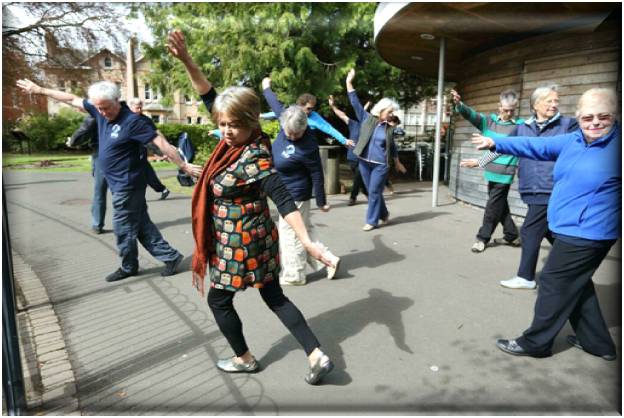 Secondly, it is curative. People suffering from a particular condition (for example angina), may practise the appropriate exercises in order to help to alleviate that condition. N.B. Members of the English Dao Yin Yang Sheng Gong Association never claim that Dao Yin Yang Sheng Gong is a substitute for conventional medicine, and people interested in exploring the curative aspect of these exercises should only do so with the full co-operation of their doctor. Under no circumstances should anyone substitute these exercises for prescribed medication.

Thirdly, Dao Yin Yang Sheng Gong is recuperative. For example, someone who has suffered a heart attack, might practise the appropriate exercises with great benefit during their return to health. Once again, one should not introduce these exercises into a recuperation programme without the full support of one's doctor.

Several clinical tests made in China and examinations done by medical specialists and researchers from all over the world, have shown Dao Yin Yang Sheng Gong to be effective in improving the health, preventing and healing many acute and chronic diseases without showing any side effects.

Although full scale trials have not been done in Europe, there are exciting results being seen by teachers working with people dealing with a whole range of conditions including stress related problems, back pain, heart disease, asthma and even very serious conditions such as Parkinson's Disease.