Back in December, Trevor was kind enough to Film me doing the simple indoor exercise - useful for beginners and for advance students stuck indoors with limited space.

The video is in the open area in the Tai Chi and Chi Kung area. The direct link to the page is here: "Tai Chi Simple Indoor Exercise"

On a warm sunny Sunday, 11 students turned out at the Upwey Memorial Hall to take part in a workshop led by Simon Watson ( Longfei Taijiquan Association of Great Britain ) covering the Yang Style 24 condensed routine in detail; the workshop was kindly organised by South Dorset Tai Chi and was attended by Trevor and Simon from CORE health

Simon Watson is Senior Technical Advisor to Longfei Taijiquan Association of Great Britain. He began his training 21 years ago with his father Richard Watson. Since the formation of Longfei in 1991 he has trained extensively with his father, Professor Li De Yin and Master Wang Yanji. He has had a successful career in British Taiji competition and has been team captain to the British Wushu Team for both the European and World Wushu Championships.

After arriving at 9:30, the session started at 10:00am with three Qigong (including the 12 as warm up). Simon then invited the 11 students to perform the 24 twice to music, carefully observing everyone as we went through the 6 minute routine. The coaching then begin.

Simon uses wit and humour mixed liberaly with reminiscences from his long experience of Taiji and Qigong to reinforce his detailed knowledge of the form and it's details. This year, as last year, Simon went through some of the finer points about the routine, the Taijiquan forms in general with a large focus on the applications to provide a canvas for our understanding of the forms.

Both Trevor and I took notes which I will write up and put in the members area.

As always, there were minor revisions to the details of many of the moves and, just to mix things up, new and different applications for Ye Ma Fen Zong.

For detailed report on the subtle changes, please see the report in the members area.

As an additional resource, the COREhealth library is now on line for Ordinary and Full members. to Access, please use your members login.

This library contains Patrick Harries and Simon Champions collection of Books and DVD's available for loan to Students. The library covers.

I have just published an updated Tai Chi 10 Principles list.

Dear Simon,
Following the Technical Panel meeting, their recommendation is that your Grade now be an A (Advanced).
I have enclosed your new card with the Grade updated and have informed John, our Webmaster.
The TCUGB wish you all the best in the future. 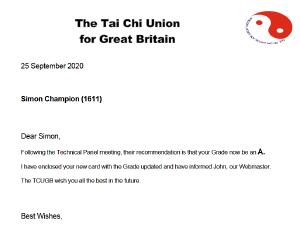